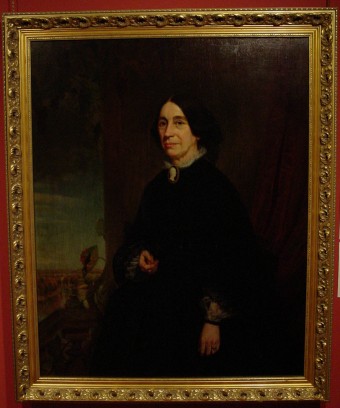 Artist Thomas Waterman Wood, a native of Vermont trained in Boston and New York, came to Nashville in 1859 and created portraits for wealthy and prominent patrons for several years before moving north to Louisville at the onset of the Civil War.

Middle Tennessee’s Western Iron District was the largest southern charcoal iron producer during the antebellum period. Limitless high quality ore and skilled enslaved laborers gave Tennessee ironmasters a competitive advantage in the national marketplace. The region’s river system (including both the Tennessee and Cumberland river watersheds) provided an economical way to convey heavy materials and the waterpower to operate complex equipment. Iron furnaces, with their massive stone chimneys, proliferated throughout the region.

Stewart County’s Cumberland Iron Works was the largest ironworks in the state. The Nashville-based partnership of Woods Yeatman & Company ran furnaces, forges, a rolling mill, and a nail factory near Dover on the Cumberland River. When Thomas Yeatman died in 1833, his widow, Jane Erwin Yeatman, who inherited 25% of the iron business, became one of the wealthiest women in Tennessee. Tall and vivacious, Jane Yeatman greeted everyone with a smile. In 1835, she married Tennessee congressman John Bell, a leader of the Constitutional Unionist political party, which hoped to maintain the Union without challenging the institution of slavery. Bell was the Tennessee favorite in the 1860 presidential race won by Abraham Lincoln.

By the 1850s, the iron industry had begun to wane in Tennessee. Advances in technology, the growing inefficiency of slave labor, and the lack of new investment contributed to this decline. Only well-capitalized firms that kept pace with technological improvements and economic changes could compete. After a brief wartime flurry of activity, Tennessee’s charcoal iron industry was mostly gone by 1880.