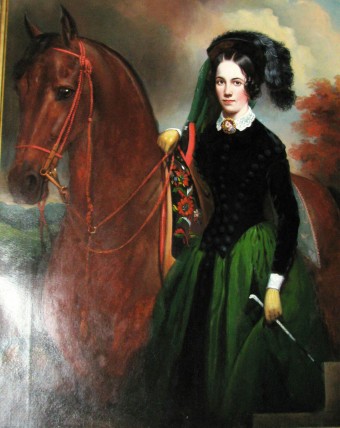 At the time this portrait was painted, Adelicia Hayes was married to her first husband, Isaac Franklin. Upon his death, she became one of the wealthiest women in Tennessee and inherited plantation holdings in Louisiana as well as in and around Nashville. View Object Details

For decades prior to the war and stretching back to the time of the American Revolution, the cotton economy had been strongly tied to British interests. The livelihoods of many in the South, including the huge number of slaves needed for an industry dependent upon manual labor, depended upon a good harvest. As Union troops moved south, landholders struggled to protect their interests.

Following the 1863 death of her husband, Joseph, who had moved south to oversee their plantation interests, Nashville’s Adelicia Hayes Acklen took charge of getting her Louisiana cotton sold. Hiring a private gunboat, and accompanied by her cousin Sarah Gaut, she traveled to Louisiana where she succeeded in exporting her cotton to England by negotiating with both Confederate and Union officers. During the war, Acklen also maintained a presence in Nashville, living at Belmont, an Italianate villa remodeled by European-trained architect and engineer Adolphus Heiman. The house and extensive grounds on the outskirts of Nashville were occupied in December 1864, just before the Battle of Nashville, by 3000 Union soldiers. Acklen, with her strong New England family connections and multiple social circles, came into contact with prominent citizens such as Sarah Childress Polk, the former first lady of the United States, and it is likely that she sought protection from Union officers at high levels. When Acklen filed for damages with the federal government after the war, however, she was adjudged a Confederate sympathizer and denied compensation for her losses.