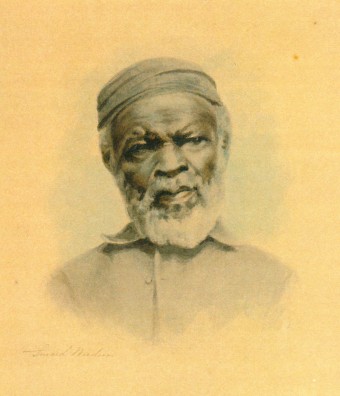 Maria Howard Weeden. Portrait of Emanuel Washington. ca. 1890. Private Collection.
This portrait by Maria Howard Weeden (1846-1905) is of Emanuel Washington, who worked at Wessyngton in Cedar Hill, Tennessee, for the Washington family after the Civil War. John F. Baker, Jr., is one of his descendants. Weeden, who created a number of life portraits of ex-slaves in Tennessee, was born in Huntsville, Alabama.

The outbreak of the Civil War brought drastic changes to the lives of the nearly 300 African Americans enslaved on Wessyngton Plantation. In 1860 Wessyngton was the largest tobacco plantation in America and held the largest enslaved population in Tennessee. For generations the slaves there had secretly prayed for their freedom.

After the Civil War, 16 families returned to Wessyngton, while others left the area never to return. During the next decades, the Wessyngton freed people established their own churches and schools, operated their own businesses, and even purchased parts of the land on which they had once been enslaved.