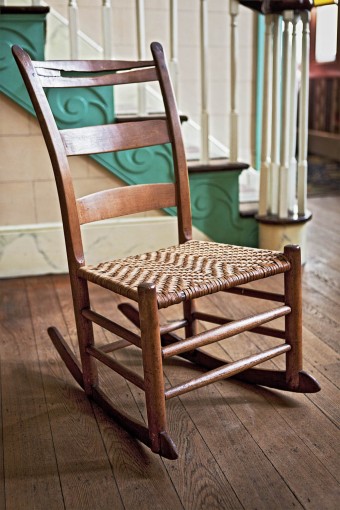 Richard Poynor (1802-1882) was born into slavery in Halifax County, Virginia. He settled in Williamson County, Tennessee, in 1816 with his master, Robert Poynor. When his owner died in 1848, Richard was valued at $450.

After purchasing his freedom in the 1850s, he became known as one of the region’s more prolific and accomplished chair makers. His “common” or “split-bottom” chairs, as they were called, were ladder backs with shaved posts and arched slats. They were made strong and durable by joining seasoned hickory stretchers to bent, green maple posts, which would shrink on the stretcher’s round tenons while seasoning. Rockers on his chairs were made from walnut. According to oral history, Poynor used a horse-powered lathe to make his turned posts and rungs. The chairs were seated with finely-woven oak splits, and then painted red, blue, black, or green for the average farmer, or rosewood-grained for the wealthier patrons. The armless rocker displayed here has the dramatic history of being a Civil War casualty. Its upper slat was shattered by a bullet as it sat in the Carter House during the Battle of Franklin on November 30, 1864.

In the impoverished economy after the Civil War, chair makers like Poynor experienced less demand for their furniture. Many supported themselves by farming and furniture repair work, such as reseating chairs and replacing broken posts and rungs.