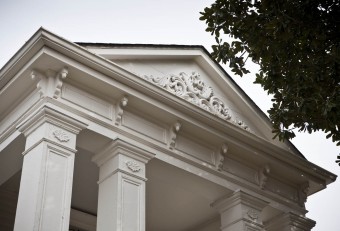 Lotz designed and built this Greek Revival, two-story frame house, which is located across the street from the brick home of Fountain Branch Carter.

In 1858 German immigrant Johann Albert Lotz (1820-1905) built a formidable wooden house in Franklin, Tennessee, trimmed inside and out with his highly decorative carving. Having learned his trade in Germany, he arrived in Franklin in 1855. Lotz had no way of knowing that his antebellum home would later be the center of the Battle of Franklin on November 30, 1864. On that day he rushed his family across the street to the basement of the Carter house, which was made of brick.

It’s surprising that Lotz’s house remained standing after the battle. Fortunately the family also survived, as did examples of Lotz’s woodworking, which reveal an artisan of considerable talent. There is a Rococo Revival sofa of his make in the front hall, a fine representation of the popular mid-Victorian style, with scrolled arms and sculptural contours. The style is also apparent in his C- and S-scrolled carvings for the pediment of the home’s columned portico and windows.

In the depressed economy after the Civil War, with no market for new pianos, Lotz survived by doing piano repair and tuning. A May 1868 letter from Franklin Gilette Smith, headmaster of the Athenaeum, Columbia, Tennessee, stated, “Mr. Albert Lotz of Franklin, Tenn., (the bearer of this) is personally known by me to be a piano tuner and repairer. He has done a considerable amount of work for the Athenaeum and has given general satisfaction in all cases.”

Lotz moved his family to San Jose, California, in 1870–presumably seeking a better market for his work. He became a carriage maker in later years.