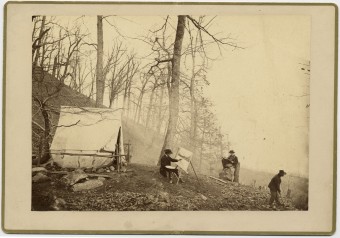 The Civil War was the first American war to be documented extensively by photographers. Mathew Brady remains one of the most recognized names in Civil War photography, but Brady took relatively few photographs in the field compared to his former employees George Barnard and Timothy O’Sullivan. Some photographers, like Barnard, were hired directly by military personnel. Quartermaster General Montgomery C. Meigs wrote to General William T. Sherman to personally request two sets of Barnard’s photographs of Nashville, Knoxville, and Chattanooga in 1864. In 1866, Barnard compiled Photographic Views of Sherman’s Campaign. Other photographers, such as Royan Linn, who had a studio in Chattanooga, made a good living photographing soldiers in camp, despite rumors that photography was dead in the South because of the Union blockade.

Photographs brought the images of war to the homes of select Americans through cartes-de-visite, small albumen portraits mounted on cards, and double-image stereoviews that required a hand-held viewing device. Photographs were often the inspiration for sketches in illustrated magazines like Harper’s Weekly and Frank Leslie’s Illustrated Newspaper. In addition, “Special Artists” like Theodore Davis, Henry Mosler, Alexander Simplot, Frank Vizetelly, James Walker, and Alfred Waud traveled alongside troops to capture events of the war. All of these artists worked in Tennessee for a portion of their careers. Their sketches were made into woodblock engravings and printed in the illustrated newspapers for hundreds of thousands of Americans to see. Foreign correspondent Frank Vizetelly’s dispatches were published in the London Illustrated News. After the war, many artists created and promoted additional war-related works of art for a popular audience. Davis served as an advisor for The Battle of Atlanta cyclorama, which stands as an important visual commemoration of the war; Walker painted large and small versions of the Battle of Lookout Mountain.