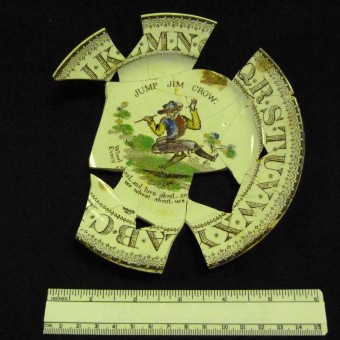 This plate was part of a children’s ABC or alphabet set of transfer-printed ware created in the early 1880s. The late date of production signifies the lingering racism of the post-Civil War era.
View Object Details

This child’s alphabet plate depicts the character of Jim Crow, introduced in 1828 by minstrel-show entertainer T. D. “Daddy” Rice. Performing in blackface, Rice danced a crazy jig and sang a song called “Jump Jim Crow,” which ended in the chorus:

Rice performed as Jim Crow throughout America and Europe during the 1830s and 1840s. He frequently changed the lyrics of the song to satirize current affairs. By 1850, Jim Crow was a stock character in minstrel shows.

The name became an insulting term for African Americans and later came to stand for segregation laws enacted throughout the South. This plate was excavated near the corner of Beale and Third in Memphis. One of the white families living on Beale Street in the mid-19th century probably used the plate and discarded it when it was broken. All through the Jim Crow era, it lay buried beneath the streets that were the vibrant center of African American business and creative life. It finally came to light, excavated by the archaeologists of Weaver & Associates in 2002, years after the Jim Crow laws were struck down.