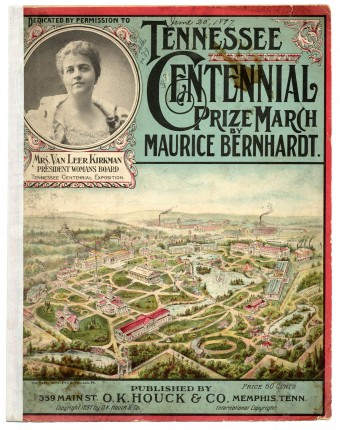 A color aerial view drawing of the Tennessee Centennial of 1897 shows the various buildings, paths, and attractions. The upper left corner of the cover has a black-and-white photograph of Mrs. Van Leer Kirkman, President of the Woman’s Board of the Exposition.
View Object Details

The 1897 Tennessee Centennial Exposition, organized to celebrate the State of Tennessee’s 100th birthday, also featured several commemorations of the Civil War. Exhibits featured on the midway, known as Vanity Fair, included reproductions of the log cabin birthplaces of Abraham Lincoln and Jefferson Davis, an “Old Plantation,” and The General, the locomotive famously commandeered by Confederate soldiers in 1862 in northern Georgia. At the Gettysburg Cyclorama, a circular building featuring painted depictions of the war, a visitor could “relive” Pickett’s Charge for 50 cents. One veteran wept, exclaiming that it “was one of the most realistic pictures ever painted.”1 The United Confederate Veterans and the Grand Army of the Republic both contributed displays of portraits, uniforms, battle flags, and numerous “relics” to the History Building. “Sham battles” took place regularly on the fairgrounds, and Confederate Veteran magazine highlighted a display from Sycamore Powder Mills, whose “great iron rollers” made gunpowder in Georgia in the 1860s. The Powder Grinding Wheels are still on display in Centennial Park in Nashville.

“United Confederate Veterans Days” at the Exposition were June 22-24, 1897, coinciding with the 7th Annual Reunion of the United Confederate Veterans (UCV). In anticipation of large crowds for these events, the Union Gospel Tabernacle (now the Ryman Auditorium) expanded its seating with a large balcony, known today as the Confederate Gallery, which was paid for by donations from the Confederate veterans. The response to the reunion events was impressive: more than 74,000 visitors attended the Exposition during the days of June 22-24, at a time when Nashville’s population was right at 100,000.