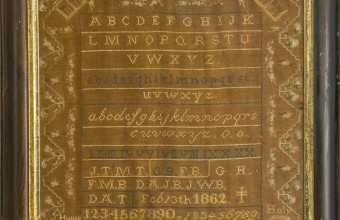 Frances Matilda Batey, the maker of this sampler, was a graduate of Mr. and Mrs. Tolbert Fanning’s Franklin College, a girls’ academy founded in 1837 in Nashville, Tennessee. Academies were private schools serving a combination of day students and boarding students. Although samplers were usually made by school girls aged six to fifteen at female academies such as the Columbia Athenaeum and the Nashville Female Academy, adults sometimes made them for pleasure. Education for boys like Newton Cannon Maney of Murfreesboro often took the form of military academies.

During the War, many women and young girls used their sewing and embroidery skills to support the armies by selling homemade crafts at fairs. Frances was twenty years old when she finished her sampler at home in 1862. That same year, Nashville fell to Union forces and would remain under Federal control for the remainder of the war. The fall of Fort Donelson in February 1862 and subsequent capture of Nashville created a panic, causing many schools to close and send their boarding students home. Fearing the loss of its charter, the Athenaeum managed to stay open, but enrollment was so low that the headmistress had to conduct classes in the bedrooms of the rectory.