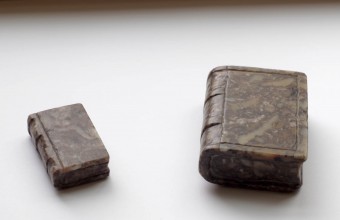 Even though the University of the South did not open for classes until after the Civil War, the University possesses significant relics reflecting the pre-war prestige of the school. A thirty-one-star silk United States flag, created by the Ladies of Philadelphia in 1851, was carried in the procession for the inaugural meeting of the Trustees of the University of the South, which took place on Chattanooga’s Lookout Mountain in 1857. Other artifacts linked to the University’s early history include fragments of the original cornerstone and a bill of sale. The Tennessee marble cornerstone, which was laid on October 10, 1860, was purchased from James Sloan, the Nashville marble dealer who had furnished a similar dark brown marble for the interior of the Tennessee State Capitol. On the evening of July 13, 1863, Union soldiers coming across the southern section of Tennessee’s Cumberland Plateau destroyed the cornerstone. Some took small fragments of the marble, and, using pocketknives and water from a nearby spring, carved them into souvenirs. These fragments, which have the appearance of miniature leather-bound volumes–perhaps even Bibles–were later returned to the University.